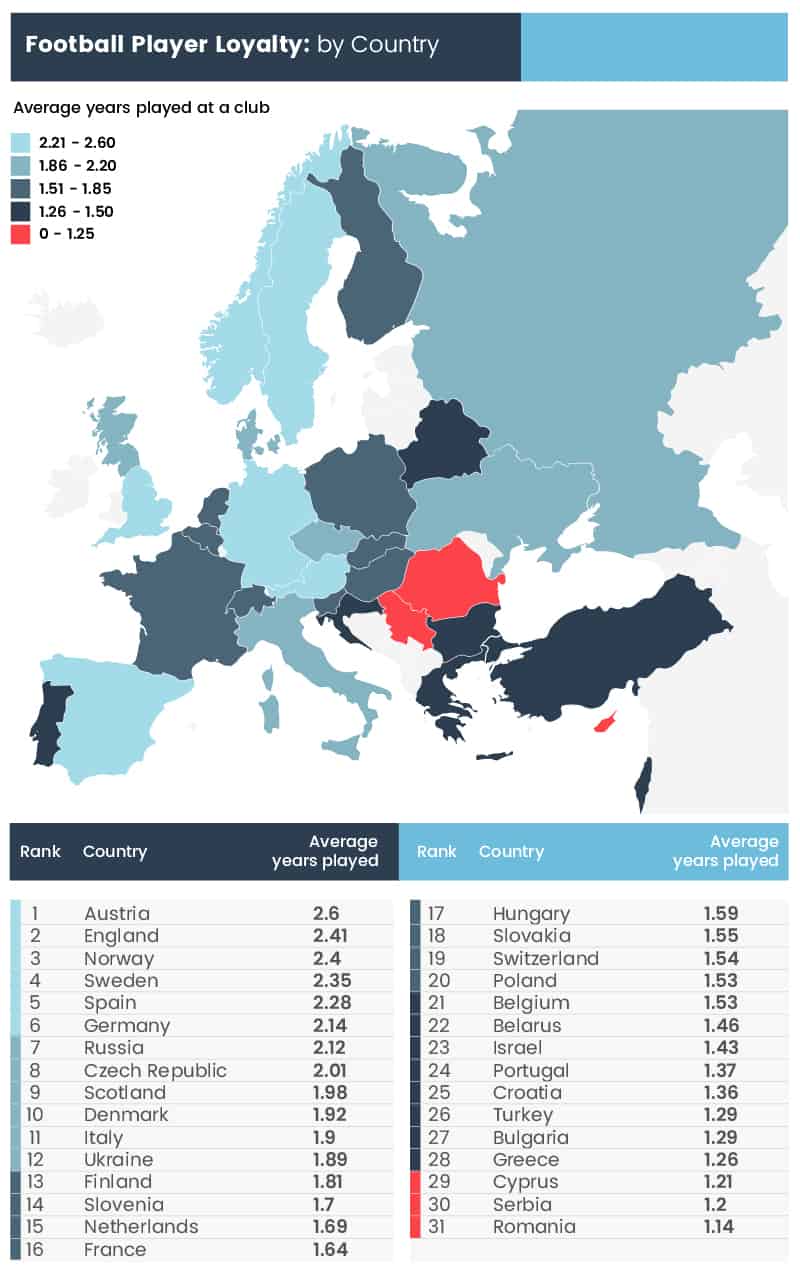 With PSG signing Neymar for a world record fee of $263 million, many pointed to it being the ultimate example of how player loyalty can be bought or sold.  In fact, new signings across top tier European squads increasing sharply from 36.7% in 2009 to 44.8% in 2017.

As the Premier League has the most spending power of any European league, you’d imagine that loyalty from players would be rock bottom, when compared to other leagues.

However, new research has found that Premier League has the second most loyal football players, with a player staying on average 2.41 years at their club.

The research from Ticketgum has found that Manchester United actually had the Premier League’s most loyal players, staying at the club for over three years, yet Watford can only keep hold of their stars for just over a year.

Premier League .vs. The Rest Of Europe

According to the study, the country with the least loyal players in Europe was Romania, where footballers only stayed for just over a year (1.14). Also coming in close to the bottom were Serbia (1.20 year average), Cyprus (1.21) and Greece (1.26).

Yet Russia’s CSKA Moskva, had the most loyal club players out of all leagues in Europe, where they stay with the team for 6.98 years.

iThere are no comments

A huge year for BusinessOfSport.Net - web traffic increased significantly, engagement rose and the most sponsored posts to date. Massive thank you for all the support, it is really appreciated. Here's to 2020 #sportsbiz
New from BusinessOfSport: Will the UK be home to an NFL franchise any time soon? Spoiler alert - it isn't likely. Read more in the link in my bio.⠀ ⠀ #businessofsport #sportsbiz #sports #nfl #nfllondon #nfllondongames #jacksonvillejaguars #jags #wembley #uk #london #craic #blog #blogging #content #smsports #americanfootball
We. Run. This. Town. #theboyiz #craicmerchants #london #boysontour

Begin typing your search above and press return to search. Press Esc to cancel.